Currently funding on Kickstarter, TERRITORY is a post-apocalyptic kaiju story set in a far distant Pacific Northwest of the United States. The comic book is written by Blake McCarthy with art by Chris Sassman, colors by Ichsan Ansori and letters by Marco Della Verde. The campaign is for Issue 3 but includes a chance to pick up books 1 and 2 as well : - https://www.kickstarter.com/projects/bmccomics/territory-issues-1-3-a-post-apocalyptic-kaiju-epic

You can also read a free preview of TERRITORY at GlobalComix: https://globalcomix.com/a/blake-mccarthy/comics

I was thrilled to do a variant cover for the comic. Given the Kaiju theme of the book, Blake wanted a cover based on Herb Trimpe's iconic Godzilla #1. 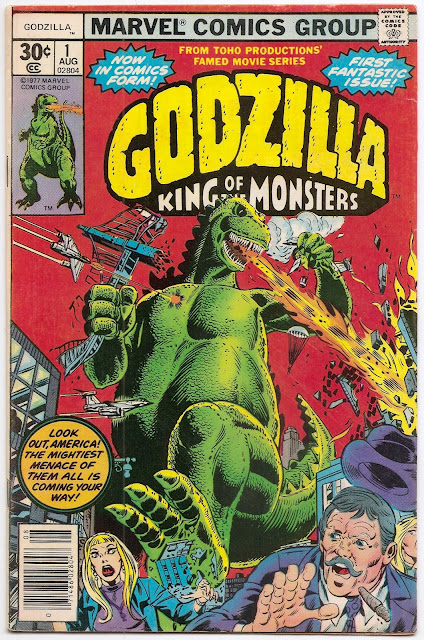 The kaiju from TERRITORY is called Greathorn and is a huge antlered bear with hooved hind legs. Proportionally he's the inverse of Godzilla, with all his mass at the top, so that brought some compositional challenges. Also, there's no planes in the TERRITORY future and Greathorn doesn't have atomic breath so I had to come up with some alternative ideas for those. We went with giant birds and some trees as they fit with the story. I substituted the main characters Alkia and Neebo for the people running in terror. Finally, I changed up the buildings a bit to fit with setting of the comic.

I did two sketches (see below) to figure out the compositional differences. We decided to go with ripping up trees rather than the 'ROAR'. 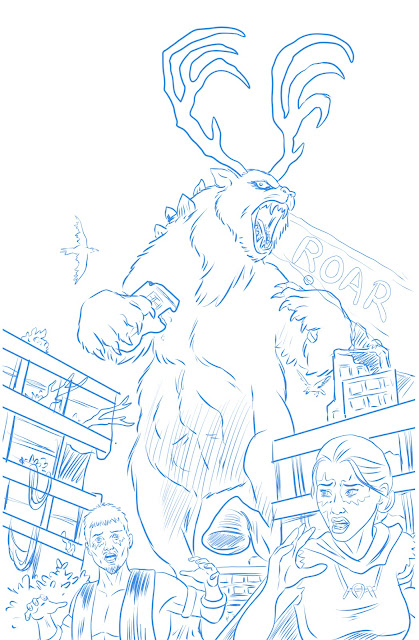 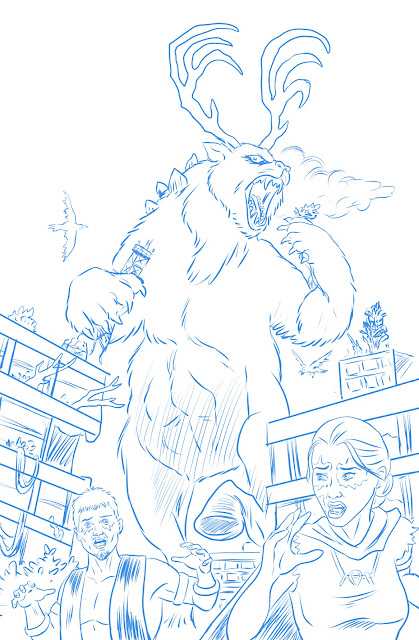 I went straight from sketch to inks as it was a tight enough drawing and also, when you don't need to pass it on to someone else for inking, it's easy enough to follow your own shorthand and fill in the missing bits. I did it all in Clip Studio using the default pens - G-Pen, Mapping Pen, Milli Pen and fill tool. I've bought a few pen and brush packs but I still mostly use the default pens because they're really good. The G-Pen in particular is perfect when you want some smooth, non-textured inks and a slightly weighted, tapered line. 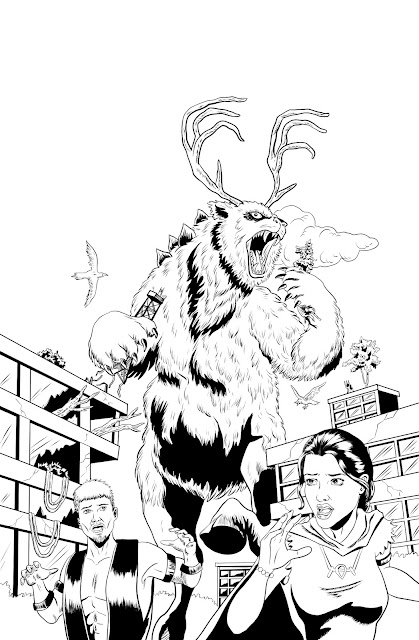 Then it was on to color! I stayed reasonably close to the original. Obviously, viewing reproductions on a screen means it's impossible to color match it exactly. (If you google the original Godzilla cover you'll see there's a huge difference in color between each uploaded version on there.) Using flat, saturated colors was quite alien to me as my personal work tends towards muted tones and layers of textures. I generally use something close to cell shading rather than heavy inks when it comes to adding depth and weight too.
The color range was kept to a minimum, the original has some highlights and gradients so I used that as a guide. The goal was to stick with effects that could have been done with the coloring and printing process in those days. I did a plain version and a version with some dots (to emulate 4 color printing).
And of course, I did a corner box to fit with the original cover. I love corner box art so I was really happy to work on a cover that needed one!

Then the art was sent to Flops comics (https://www.instagram.com/flopscomics) who did an incredible job adding in the dressing and some aging effects to bring it all together! Here's the finished piece:

If you'd like a copy of this go check out the Kickstarter!
comic art cover art indie comics kickstarter process territory