That's another San Diego Comic Con over and done with! It was, as ever, very busy and filled with amazing things and wonderful people. I was at the convention for 3 days and I only saw a small fraction of what was on show.

Thursday was the 'Mine!' signing. This anthology is currently up for a Ringo Award and one of the stories from it was up for an Eisner. I worked with Gail Simone on a story for this book and I was thrilled to be able to sign with her.

I was also able to meet a lot of people who worked on the book who I've only known through emails and social media. It was lovely to finally see everyone in person! The signings went on throughout the day as there were so many contributors at the show.

Thursday night was the Nuclear Blast / Court of the Dead after party with Carnifex and Testament. It was an incredible show! We'd missed seeing Testament earlier this year when we arrived late to the Slayer gig, so it was great to finally catch them, especially at a smaller venue. 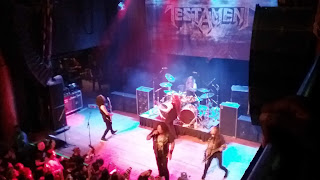 I signed at the Heavy Metal Booth on Friday.  I will be returning to the pages of Heavy Metal soon *Surprise*! And it'll be with my first ever fully digitally drawn / colored/ lettered comic. I'm not sure what the release date is, but it should be very soon.

Leaving the con floor on Friday, I bumped into my old pal Wicket. He was on his way to help the rebels destroy a shield generator but very kindly stopped for a photo.


Kymera Press had a great booth this year. I've been working with Kymera Press for just over a year now as an Art Director for some of their titles. Their slate has expanded very quickly and includes a diverse range of comics, as well as some plushies! This year they also had quite a few signings, and a very popular panel ('A celebration of Mary Shelley'). Check out their website, the new issues debuted at Comic-Con should be up soon: www.kymerapress.com


Also, a lot of booths were just previewing stuff so I couldn't buy it (probably for the best!). Hasbro had some great G1 Transformers stuff that will be available from Walmart later this year. Mondo had some amazing stuff, as always, including some upcoming JAWS tiki mugs.


There were a lot of trailer drops and reveals at SDCC this year, but the big one for me was the Clone Wars news. I love that show and can't wait for it to return!


The Aquaman and The Godzilla trailers also had some great moments:


I think that this was the busiest year yet. I don't know if it was but it certainly felt that way. Even preview night was crammed with attendees. But I'm glad I got to go!
Time to get back to making comics - I have some new projects on the way. In the meantime, please check out my current book 'From Savage Seas'