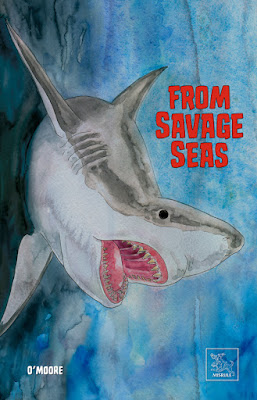 My next comic book 'From Savage Seas' is due out at the end of March as a limited edition print run. A digital version will follow later in the year.
'From Savage Seas' is a one-shot, collecting together two brand new tales of marine based terror. Although it's quite an over the top sort of book, it's also quite a personal one. You may have noticed I love sharks and sea monsters, but it's been quite a while since I got to do a comic about them. So I'm sort of going back to my roots with this one!
The print edition will be sold through my Etsy store and will be a very limited print run.