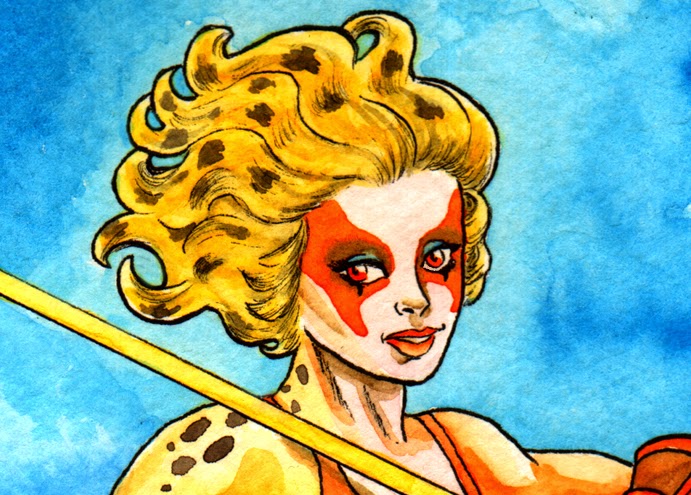 I'd wanted to do a proper Cheetara painting for a long time. For a little girl in the 80's, Cheetara was one of the coolest characters. She was smart, athletic, and had an extra power (her sixth sense) which none of the other Thundercats had. More importantly, she had the respect of her peers. A lot of other cartoons and comics at the time included female characters which were meant to be tough but there was still the eye roll 'that's women' attitude from the male characters which just undermined the whole thing. As the series wore on Cheetara became less powerful and got increasingly less screen time. She needed to be rescued. Although, this happened at a time when they felt the need to make Lion-o seem more important so actually all the other Thundercats got the same treatment, but that didn't make it suck any less.
80's villains had great design and so much humor. One of my favourite Jackalman moments is when he's attacked by the creatures in the moat outside their castle and he shouts 'You fools! I live here!'.


Re-watched some Masters of the Universe cartoons recently. Skeletor is one of the greatest cartoon villains. Apart from his amazing design, the voice actor did a great job with his chuckle and his put downs are hilarious. (Supercut of his insults here: http://www.youtube.com/watch?v=pC0ewS2Zesg ) Plus his schemes are ridiculous! 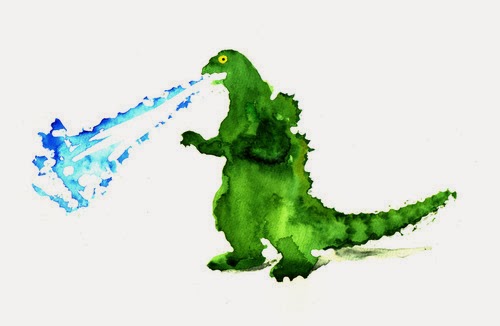 I did a Godzilla painting, which I've also been meaning to do for a while.

So, 2013 was a pretty crazy year for me. I moved to America and it's been a much bigger adjustment than I anticipated. The whole year has been a huge adventure. It's been amazing, it's been really tough too, but well worth it. I did quite a few comics, only one of which has seen print so far, but hopefully the others will be released this year. I've written a whole bunch of comic scripts (including an epic sci-fi series) I have no idea what I will do with those yet. I've also been working on book illustrations, including a series of kids books which is due to launch this year. I 'm very excited about that. I opened up a store on Society 6 too, so you can buy my artwork on all manner of things. Please share it and let people know about it!