August 30, 2013
Last weekend Andy and I ventured out to Alhambra for the Gallery Nucleus preview of Scott C.'s new book. I'd been meaning to go to Gallery Nucleus for a while, they always have great stuff on, but it's a bit of a trek and I've only recently learned to drive so braving the journey to L.A. is still quite daunting.
I've been a fan of Scott's work for a long time and was lucky enough to meet him a few years ago when we both had stalls at SPX. We wanted to see his new work and also we'd heard there'd be dogs at the show so we decided it was finally time to visit Gallery Nucleus.
We got there early and went foraging, because terrifying road trips make you really hungry. Luckily we found Grill 'em all. 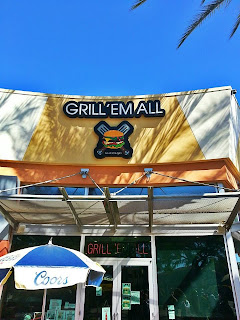 I'm watching what I eat at the moment so I just got a salad (which came with fried chicken, bacon, and the croutons were deep fried waffles) - super healthy. Andy got a burger which came with grilled cheese sandwiches instead of buns. Awesome. It reminded me of the burger van from Regular Show. Then Andy discovered the signed storyboard from that episode hanging up on the wall, so guess what? It IS the van from that episode! 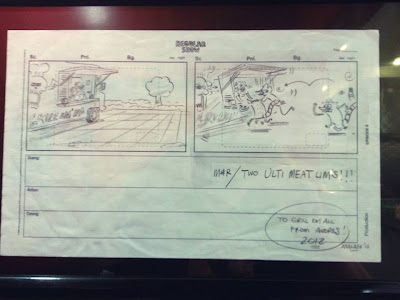 The exhibition was excellent and we got to watch Scott drawing and talking about his work. 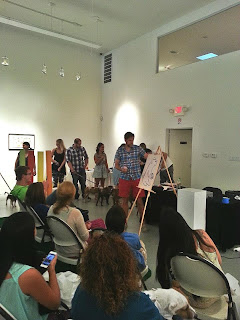 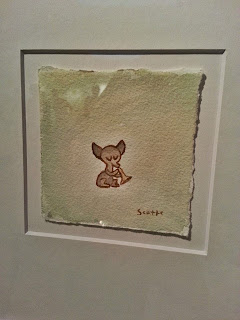 And we got to play with a lot of dogs (and almost adopted one). Scott's new book 'If Dogs Run Free' is based on a Bob Dylan song. I think it's intended for kids but really it's for anyone who likes cute/funny/amazing art and/or Bob Dylan songs. Gallery Nucleus have a limited amount of signed copies you can buy here (if they're still in stock)

Last night we decided to endure another trip to L.A., complete with rush hour traffic, to attend the Comics Industry meal, which is an informal networking type thing. I met lots of awesome, inspiring people, and not just from the world of comics but also from the animation, games and film industry.
Mairghread Wild Scott (IDW / We Comics) and Jason Enright (We comics / Darby Pop Publishing) were there and Jason gave a wonderful talk on social marketing and kickstarter for comics. He also did a very helpful Q and A session. I was sitting next to cartoonist Lonnie Millsap, who does funny one panel cartoons, check out his stuff here. I also chatted to artist / writer William O'Neil, creator of comics published by Image and IDW, check out his stuff here. It was nice to finally meet some comics people in the area, thanks to Emily McGuinness (Latchkey studios) for organizing it.

What else have I been up to? I've got some new paintings for sale at a local gallery.

I've also been keeping myself busy with a new project. I had an idea in my head for a long time and finally decided it was worth putting down on paper. Character designs, 2 issues of scripting and a 20 issue overview later....it went from pet project to all consuming project very quickly. That, my friends, is the danger of making comics.
It's a sci-fi thing and here are some of the rough character sketches so far : 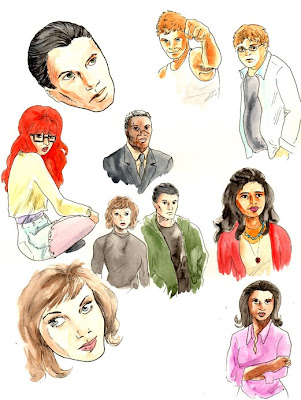 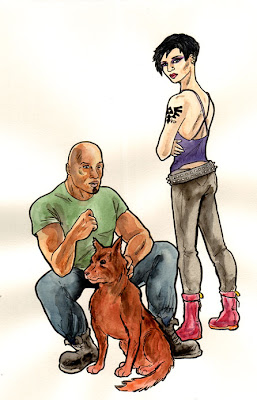