May 11, 2013
So, this weeks theme on 'the Weekly Themed Art blog' is Ray Harryhausen.
Harryhausen's work captured my imagination as a child and continues to fascinate me as an adult. His work went beyond special effects, managing to capture something magical and enchanting. I can't really come up with a fitting tribute, but I think it's safe to say that a lot of what I do as an artist is greatly inspired by his monsters and dynamation creations.

I thought I'd do a process post about this picture, so you can see how I typically work:

First come the pencils. I do these pretty rough. This is a mechanical pencil on layout paper. I wanted the characters to look like the models. I've seen some of these in person, at the London Film Museum, so I wanted to capture certain things I'd remembered about them. For example, pegasus is really furry when you see it up close. 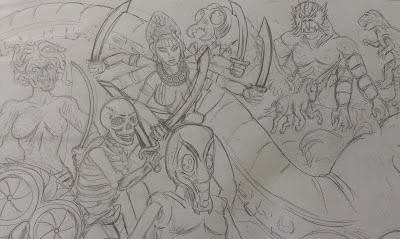 I noticed after this that I could fit another monster in front of the octopus so I added Ymir  from 20 million miles to Earth.

Then I ink it. I magic tape some bristol board over the layout paper and use a brush and ink to clean up the finished picture.

I scan the inks in so I have a black outline copy, should I ever need it. Annoyingly, my scanner is A3 sized and the paper I currently use is American sized, so it doesn't fit properly. I have to cut it down.

I put some masking fluid on bits that I want to keep lighter or keep white. I don't always use masking fluid, just for certain pictures. Then I paint a light wash over the page. I usually do a warm colour wash, but for some reason I thought a cool wash would work better for this picture. 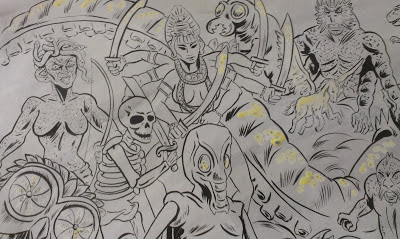 Then I paint in the background (which, apart from the rock that Gwangi stands on and the sea, is just colourful nonsense) and take off the masking fluid. I'm taking the masking fluid off early because I don't want bright white in this picture. I use watercolour paints,sometimes I use inks too, but not for this picture. 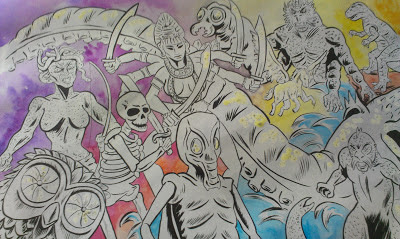 Some people like to start by blocking in shadows. Sometimes I do this, but I wanted nice bright colours and soft shadows so I painted each character up then added shadows in complimentary tones. 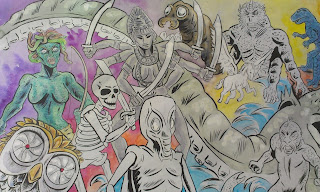 And it's finished. After I scan it in, I usually have to adjust things (like levels) in photoshop so it looks bright like the original painting.: 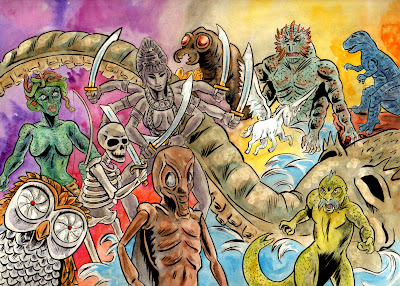 I think the best thing is that it looks like Bubo is photobombing the monsters. I only put him up front because he's little, but it turned out well :)
clash of the titans drawing dynamation film gwangi harryhausen monsters painting process ray harryhausen weekly themed art blog