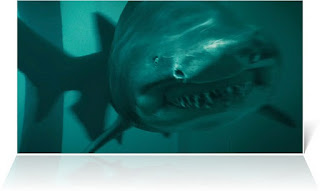 Shark Night 3D
After a slew of straight to SyFy nonsense, 2011 saw shark movies return to where they belong - on a cinema screen in 3D.  The plot of Shark Night 3D was every bit as flimsy and idiotic as anything SyFy has to offer, but it had better effects and was in 3D. There was a good variety of shark on offer, even the ridiculous cookie cutter shark got in on the action. The constant giant plot holes were a bit unnerving when witnessed on a large screen with surround sound, a constant reminder that the only reason this made it to the cinema was the 3D-ness of it all. 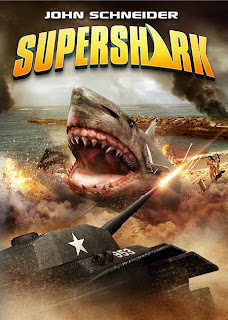 Super Shark
When trailers first appeared for this online I instantly assumed it was another spoof - along the lines of 'Ghost Shark' or the more recent 'Shark Pool'. So I was pretty surprised (and secretly happy) when it turned up on SyFy in all it's schonky glory. It begins (and ends) with a shark on land fighting a tank with legs. The shark also has it's own song. That's really all you need to know.The effects are very poor, even by my standards.
Fun facts: The main actress in it also starred in Mega Shark vs Crocosaurus. The guy who directed Super Shark is the dad of the guy who directed Mega Shark vs Crocosuarus. 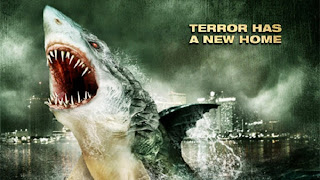 Some weird looking shark gatecrashes 'Gator Fest'. Starring Kristy Swanson, who also starred in another movie about a shark in a swamp (Red Water - 2003). Awful. 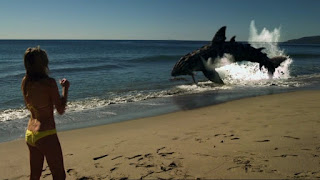 Sand Sharks:
Yet again, the trailer would lead you to believe that this is a spoof. It isn't. It's an actual movie made by actual people. I haven't seen this yet, but it looks like it's about spikey sharks that can swim through sand and are intent on ruining some beach party. It stars Brooke Hogan, who will also be featuring in the Asylums upcoming Two-Headed Shark film. 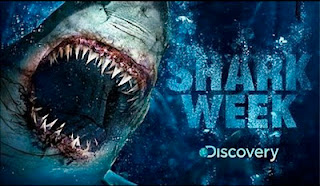 Live Every Week Like It's Shark Week:
Wow. The internet went crazy for Discovery's Shark Week. It's a pretty big deal for Discovery anyway, but this year it seemed to be a meme, a trend...it took over the internet. I don't know what the viewing figures were like, but apparently 2010 had 30.8 million viewers. Not bad for some shows about fish.
I've probably watched more Nat Geo stuff than Discovery in 2011, they just seemed to have better shows this time. I've particularly been enjoying Nat Geo's series 'Shark Men' which follows a group of scientists (who aren't all men - stupid title) as they tag Great White Sharks. 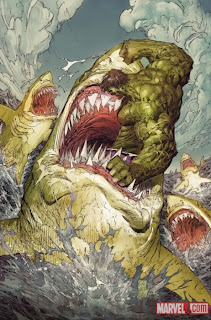 Gamma Ray Sharks:
I haven't read any Hulk comics in a really long time, but thanks to the huge clunky chunks of exposition in this comic I was able to get up to speed on everything that was happening. I only bought it, like many other people, because there are hulk sharks in it. The only good thing in the comic were the sharks. 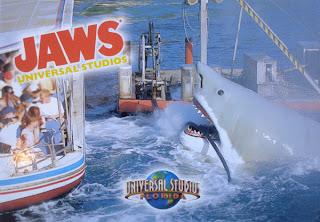 Bye Bye Jaws Ride:
The Jaws ride closed it's waters to the public at the start of this year, making 2011 the last ever year to go visit Bruce in his Floridian holiday home. I didn't realise that at the time, and I never got to go see it, AND NOW I NEVER WILL!! But thanks to the magic of the internet, you can pretend you got to go:
http://www.youtube.com/watch?v=T_t3Q6ahmyU&feature=player_embedded
I guess after being shot at and mutilated a few times a day the shark was probably due for retirement.