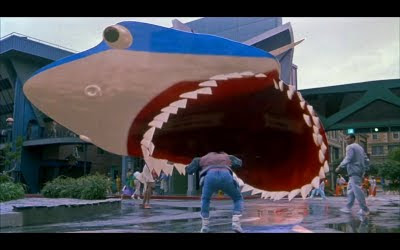 With all the recent internet buzz of Nike making Back to the Future 2 trainers, I was reminded of something else awesome from that film - Jaws 19. Back to the future 2 takes palce in 2015, so Universal only have 4 years to make 15 more Jaws movies.

Don't worry Universal, I got your back. Here's 15 Jaws movie scripts ready to go. I assume you'll start filming posthaste:

Ellen Brody and Michael Caine are enjoying a happy retirement in Amity, when an old friend comes to visit. And by 'old friend' I mean a 25 foot great white shark. Although some teenagers seem to have gone missing, no one, except Ellen, suspects a giant shark. Assuming she's gone as crazy as her late husband, the Mayor ignores her and goes ahead with the 4th of July celebrations....with disastrous consequences.

Jaws death: speared through the head with an American flag and blown up with fireworks. 4th of July, yo!

Ellen Brody has passed away from a heart attack, brought on from the stress of the last film. Thea Brody, her Granddaughter, decides to stay in Amity after the funeral. Thea is a budding director who wants to capture Jaws...on film.
She teams up with a tough young fisherman to find the shark that has plagued her family for generations. He gets eaten.

The new Mayor becomes obsessed with the history of killer sharks around the island. He is convinced that it's been the same shark all along and that shark is infact an evil spirit that cannot be killed. So he calls in a priest to do an exorcism.

Jaws death:
A crucifix to the eye, drugged and airlifted in to a shallow pool of holy water.

Luckily for Amity, the exorcism didn't work. Luckily? That's right, because now there's another killer in the water, a giant rogue Orca, and only Jaws can stop it.

Jaws Death: Who knew that ingesting fake tan was fatal to sharks?

A freak tsunami engulfs most of Amity. Jaws has a great time.

The newest Mayor is sick of the ongoing shark problem and recruits a team of specialist shark hunters. A rag tag bunch of tough guys and gals, they've already taken out monsters such as Megashark, Dinoshark and Sharktopus. Surely Jaws will be no problem...

Bored of Amity, Jaws decides to go terrorise a holiday paradise during spring break. In 3-D.

After a catastrophic oil spill, Jaws decides to take out every oil operation he can get his fins on.

A colossal squid has moved in to town, and no-one likes it one bit. Especially not Jaws. FIGHT! At only 25 feet, Jaws is the underdogfish. A heartwarming tale of courage in the face (and tentacles) of adversity.

An exhibition of Polynesian artifacts at the Amity Museum of stuff includes a curious amulet which falls in to the hands of a corrupt businessman. The amulet gives the wearer control over sharks and the businessman uses it to terrorise his competition. But, as the businessman soon finds out, there's one shark that doesn't like being controlled.

Hearing tales of a huge indestructible shark off Amity, the Discovery channel decides to centre shark week around the goings on of the island. Having previously been killed by a camera rig, Jaws is not too happy with their arrival. But, on the plus side, best shark week ratings ever.

Jaws Death: Some TV 'expert' claims to know a sharks weak spots, but ends up just shooting it in the head. Like a zombie. Which Jaws technically is by this point in the franchise.

Matt Hooper Jr. is a geneticist working with sharks. He's created a new breed of shark able to survive out of water for long periods of time, to give scientists more time to conduct tests when they are working in the field. However, the shark escapes and mates with Jaws. Their offspring are a new breed of supershark - able to attack in and out of the water!

Jaws death: Lured on to traintracks, electrocuted and then hit by freight train.

Not all the offspring died. Actually, they did die in the last film but they'd all inherited Jaws' 'Jason Vorhees'-like regenerative powers and are back to wreak havoc. The remaining ones breed at an accelerated rate (and can fly), so they launch a terrifying attack on mankind - ON LAND! In the ensuing war, people are forced to build vast undersea fortresses as their coastal towns are destroyed.

Shark deaths: deaths from all previous films re-enacted as a lazy 'homage'. 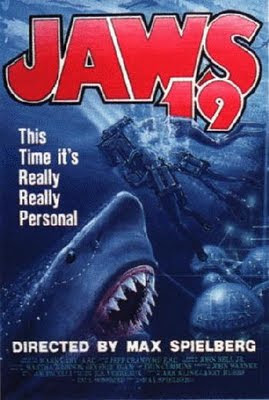