The Hook Jaw that never was 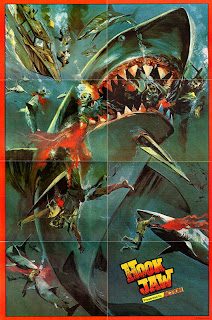 Anyone who has visited this blog before will probably have noticed that I'm a huge fan of sharks and comics. So, to me at least, a comic about a shark is the greatest thing ever.
Back in early 2006 I had an idea for a Hook Jaw comic that I thought would be awesome. The basic gist of it was to present Hook Jaw as a legend and have different artists/writers do self contained stories set in different times and places that would build up the mythos of the shark. I managed to get some incredible UK talent interested, including Pat Mills (which I still can't believe)!
Egmont, the copyright holders at the time were initially happy for me to use the character. But then it all got complicated. They decided that they did not want the risk of publishing it, and wanted me to publish it myself and they would get royalties. Then they wanted me to do an analysis of how many I thought would sell, as they were only interested if the project would generate a decent amount of royalties. To do that, it would need to be a big print run, with plenty of marketing. Not being rich (and before crowdfunding was popular) I had to give up on the project. I've always wished I could've done it. I see now that Strip Magazine will be reviving the character. I'll be interested to see what they do with it.
british comics comics hookjaw pat mills sharks strip magazine