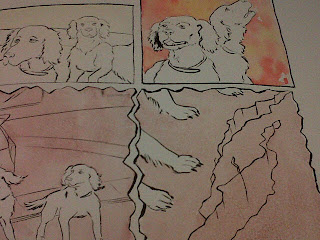 Working away on a new comic for a charity anthology. The image above is the 'inked, first wash of paint' stage of the process. Hoping to get it painted and scanned by tonight.
It's been a while since I did any shark movie reviews, so here's two quick ones for you, along with product links because I know you'll want to buy them straight away:

Sharktopus:
Part shark, part octopus, all killing machine! Sharktopus is a genetic experiment / military weapon that goes haywire and ends up on a killing spree. Terrible effects, poor continuity and no attempt at acting make this movie everything you'd expect. It could've done with being more outlandish (yes, I know it's about a half shark, half octopus...), they could've pushed it a bit further instead of letting it languish in a predictable tv movie hell. Megashark vs Giant Octopus (from relative newcomers to the monster movie genre 'The Asylum') gave us sharks eating planes out of the sky! The most Sharktopus manages is eating someone on a bungee jump, but even that is presented in a pretty pedestrian way. There are many missed opportunities in the film. Having spent much of the movie pointing out how smart an octopus is, they fail to actually demonstrate this at any point. When Sharktopus pulls a car into the sea I thought perhaps we'd see him drive up the beach in it later or use it as the basis for some A-Team style montage. Unfortunately, neither of these things happen. He is occasionally bullet proof though.
I'd hoped for something a bit more savvy, or at least ridiculous, from veteran B-movie producer Roger Corman.


The Reef:
People adrift in the ocean get stalked by a shark. It sounds like Open Water, but it's surprisingly different in tone and style. Like Open Water, this film is also apparently based on a true story (although the director also made the same film some years ago starring a crocodile instead of a shark...).
They've used live shark footage which puts this film head and shoulders above most shark movies, because you don't need to worry about how real the shark looks when you've got an actual great white sticking it's big nose right in the camera. The shark is written to behave in a pretty normal fashion too, no mutations, no laser eye beams etc. So it's quite a refreshing change from the usual sensationalist nonsense that I tend to watch. It could've been a bit more tense, given the predicament the characters are in. It's well shot, the acting is okay (for a low budget indie style film) and all in all it's actually a pretty okay little film.

The Arctic Marauder - Jacques Tardi
This just turned up in the post for me and it looks AMAZING! The artwork is beautiful!!! So I thought I'd share it with you (with a product link so you can go buy it right away)
comics products shark movie sharks