September 13, 2010
Awesome!!! This is a great event. I've met tons of great people. Made lots of new friends. John from Metaphrog kindly took me around and introduced me to some publishers too. On Saturday night we popped over to another convention that was happening up the road, for web comics. They had a lot more merchandise and people dressed up, but it was a bit quiet. it was interesting to see the difference in approach to selling.
My prints were very popular today, infact people were giving me more than the asking price, a lot of people said I should charge more! I've never been told that in the UK.
Here's my table buddies Brian and Clay on the lookout for customers: 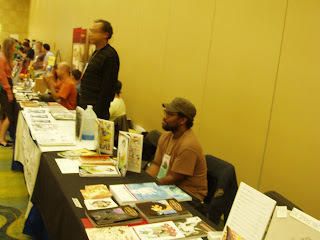 I tried to resist buying stuff because I have an epic journey ahead of me. But I had to get a Scott Campbell print, they're too brilliant to pass up, and lightweight enough for me to bring along on my epic adventure. Also got some mini-comics and a great comic about a shark called Xoc by Matt Dembicki.
Hats with eyes and teeth seemed to be the runaway hit of the show, but they did have godzilla advertising them and you can't get a better endorsement than that: 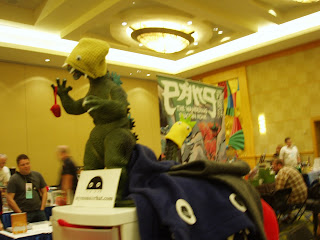 Also got to hang out with a lot of the cool people I met during my last visit to DC, the DC Conspiracy crew, Matt and Shannon and Greg Bennett (who will hopefully be touring the UK with his band at the end of the year: the jet age ).
Off to San Jose now for more adventures!
comic convention events spx stall