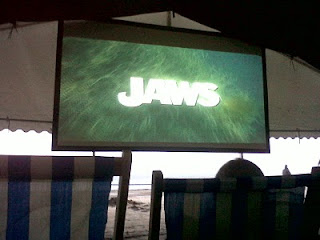 Whitley Bay Film Festival screened Jaws at the beach last weekend. It was awesome. The beach is definitely a great place to view the ultimate shark film.  The deckchairs were a bit uncomfortable though and the poorly timed explosion at the end didn't really enhance my viewing experience.  It's a strong enough film to stand on its own as an event without all the silly extras they tried to tag on. There was also a small exhibition of Jaws merchandise and props at Links gallery.
I ran a comic making workshop at the Lit and Phil last week as part of their Viz exhibition. It went very well, we made topical comics about vultures, Jade Goodys ghost, Gordon Brown, Jesus and useless qualifications.
Dr. Mel Gibson is giving a talk there tomorrow and Simon Donald is doing a talk on Tuesday. Check out all the details here: Viz exhibition
Just sorting out the final arrangements for my whirlwind tour of the USA next month. First up is the comic festival SPX, where I will be selling the following comics:
Some Forgotten Part, Monstrum Horrendum book 1 and book 2, Tag Team, The Shark Report, Sunday
As well as lots of prints, postcards, notebooks and hopefully some little woolly sea creatures too.
I will also be adding a trip to The Asylum, makers of such cinematic classics as Megashark vs Giant Octopus, Transmorphers, Titanic 2 and Mega Pirhana, where I will be working with Volt Media to shoot a promo for my next project. Ooooh...what can it be?
Then I'll be popping up to Ventura to check out the Cold Steel Challenge fighting tournament, where I'll be cheering on 'Is it cos I'm fat?'
I'll also be visiting family and causing general mayhem on both coasts. Wooooo!
Did I mention that I'm in this months edition of Glamour magazine? Because I am.
Pick up your copy before they're all gone.
cold steel challenge comics jaws mega shark spx the asylum