July 03, 2010
Everyone else on the internet seems to be spouting on about the new Wonder Woman costume so I thought I might as well join in.


I don't think the re-design is bad, I just don't think it's right for Wonder Woman. You can't really rebrand an icon and keep it recognisable, the best you can hope for is to just make slight adjustments. But I suspect DC just wanted some short term publicity (which they got plenty of) as opposed to a long term change. Or perhaps they're gearing up for the alleged film that's been on it's way forever.

Even the Guardian newspaper felt the need to comment. I thought their suggestion, although (hopefully) tongue in cheek, was awful and missed the point of the character. For example, I don't think Wonder Woman has to worry about putting her hair in curlers, apart from the fact she's meant to be a naturally beautiful Amazonian she's also a drawing.

So, here's my suggestion with a quick little doodle to illustrate my ideas: 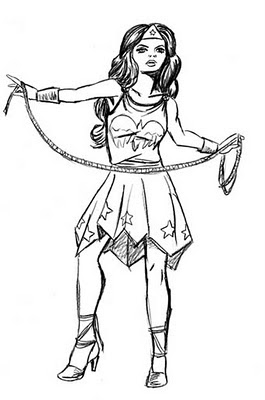 And here's the thinking behind it:

Basically, it's a classic Wonder Woman look, with some modern touches.

The drapey top is based on the old 'Young Diana' outfit.

The skirt - Wonder Woman wore a skirt in her first appearance. It was changed in favour of shorts, believed to be a bit more modest. Ironically, after complaints about the content of the comic, a propsed redesign in the 40's suggested a grecian style tunic as a more proper outfit.

The skirt idea made a few comebacks during the golden age, the 80's and even in Kingdom Come. It looks a bit structured in my sketch, but I was thinking something like a hankerchief hem would be a good update, along the lines of Beyonces ridiculous outfit in Lady gaga's Telephone video. (Ridiculous for a person, perfect for a comic character)
Are skirts really impractical for a superhero? No, because it's a comic and you can choose what angles you draw things from. She had far more on show when Deodato drew her in tiny pants.

Shoes: A return to the strappy sandal, currently on trend and a Wonder Woman fashion staple during the late 40's through to the 60's. Also, they fit well with Marstons original vision of a comic filled with bondage images.

But, for the record, my favourite ever Wonder Woman artist is Darwyn Cooke. They should just let him sort it out.
rant superhero wonder woman