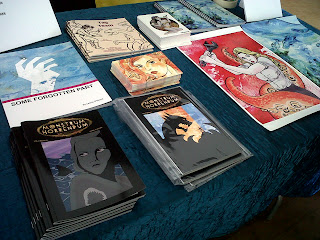 So, I went to the Point Village Comic Market in Dublin on Saturday. It's the first time they've had a comics section at the market (which is only a few weeks old itself). I had a great time, it was nice to see how much the scene has grown since I left Ireland. The standard of work was very high and there was a really positive atmosphere. My stall was next to Philip Barrett and Ciaran Lucas. I've been a fan of Phils work for a long time, (we used to stock one of his early books 'Matter' at There Goes Tokyo...) and it was lovely to catch up and see his new work. I hadn't seen Ciarans work before, but I will definitely be keeping an eye out for it again. And if you see him at a convention, be sure to get a sketch, they're amazing!
I got some lovely feedback about my work and managed to sell some  'Monstrum's, 'Tag team's, and a 'Some Forgotten Part'. My new postcards were pretty popular too.
Hurray! 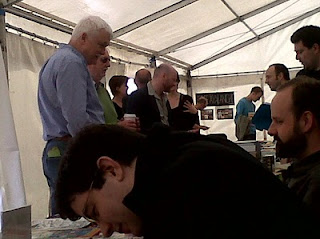