This time last week I was dragging tables about.

April 17, 2010
Last Saturday was the P.R.E.S.S. event that I've been all busied up with over the last few months. You can blame that for the lack of shark movie reviews and pointless doodles that have been so painfully absent from this blog.
Martyn (who I exhibited work with last year) and James let us stay at their house while they were away, which was great as they lived really near the venue, but bad because their devil cat hates people. Even me. And I gave it food and everything, but it still wanted me dead.
The event ran smoothly, but it wasn't as busy as I'd hoped. And sorry to the people who turned up to Drink and Draw after we'd moved to the bar!
However, the event was perfect for the needs of P.R.E.S.S. We made lots of contacts, everyone seemed pleased with the event, and we got plenty of feedback. As well as some excellent photos from Sheriff.
There's an outline of the event with photos at P.R.E.S.S.
Busy as I was, I still managed to pick up some loot! 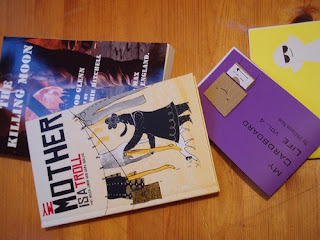 The Killing Moon by Rod Glenn and Jamie Mitchell (Wild Wolf Publishing), which is described as : 'The Road meets Mad Max ... Beyond Northern England'.  My Mother is a Troll, by Helen Limon and Sara Ogilvie (Zed Said) which is technically a kids book but I'd recommend it to anyone because it's excellent, and My cardboard life by Phillipa Rice, a beautifully made bittersweet comedy with cardboard.
Personally, I enjoyed the event. I got to meet lots of cool people.
We also resurrected There Goes Tokyo... for the day, in an effort to educate the young 'uns about the old small press scene (really it was an excuse to clear out the spare room). Poor Andy had to miss out on kettlebells (which he's enduring for this documentary) and sit behind a stall all day.
Thanks to everyone who came along, Deirdre and Theresa for their awesome talks/workshops, all the authors and poets who treated us to readings, Mike for the brilliant zine trail, Derrick for the mobile requests, all the stall holders (fully listed with links here), and to Matthew, Tom and Phillipa for travelling all the way up North.
More reports of the day here and here.
Also, New British Comics (featuring my work! and some other peoples work too) is up for a few Eagle Awards, so please vote for it!
events press