What I've been doing

This is what I've been working on recently: The next Accent UK anthology 'Predators', A pin-up for a colouring book based on characters by Richard J Smith, and issue 2 of NBC.
And here's the cover for Book 2 of Monstrum Horrendum, which is crawling along at a snail's pace, but should be done in time for Thought Bubble: 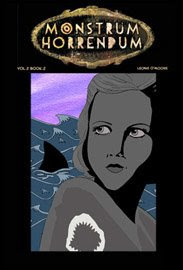 We still need a name for this, so far here are some of the suggestions:

Like any of them? Have a suggestion? Let me know. I'm making some great strides with the project, but we really do need a name.

According to an article in the Guardian about my favourite film studio 'The Asylum' (if you have sky you will probably have come across some of their classics such as 'snakes on a train' and 'transmorphers') Mega shark vs giant octopus is going to have a cinema release. Wow. I'm assuming it's down to my glowing review.