August 19, 2009
Wow. A lot's been happening. Quite a bit of freelance work, illustration, teaching, that sort of thing. I might be doing another exhibition soon with my friend Martyn Jones who is a sculptor/painter/printmaker, so that will be an exciting collaboration. Things are moving along with the super awesome idea (I promise there will be a decision made on the name very soon!), with talk of a zine/comic/book fair and possibly an exhibition/event in the near future to kick things off. There'll be a proper meeting probably around early September to get everyone up to date on what's happening and how to get involved.
I've also been working for quite a while now with bookbinder extraordinaire Deirdre Thompson on an amazing project, and we're nearing completion so I can tell you all about that soon.
I'm also working on re-doing my website. Just a little spring clean and an update.
Of course, production of issue two of Monstrum has been paused while all this goes on, so I'm hoping to free up some time at the weekend to get back to making comics. Yay comics!
I've been enjoying doodling with biros lately, it's something I want to explore properly when I get a bit of time. I think I could do something nice with biros and watercolour washes. Here's a Cheetara biro doodle I did the other night. 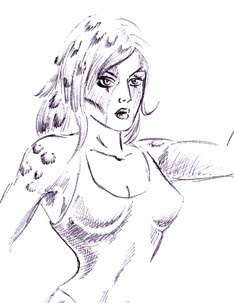 Here's a little picture I did in photoshop. The image was in my mind from a comic I wrote called 'terminally pretty'. I abandoned the project because I saw an episode of Dollhouse with a similar type of plot (that Joss Whedon, always stealing my ideas). Anyway, it might get re-worked at some stage because I think the title is quite funny and deserves a book to go with it. 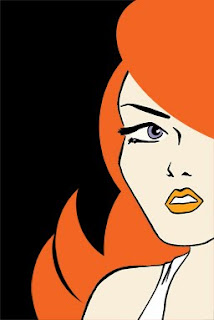