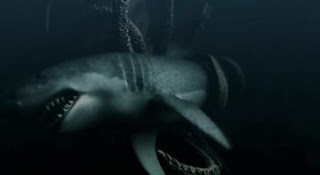 Okay. I watched it. Here's the review you've been waiting for. I'd warn you about the plot spoiler, but there isn't too much plot to spoil.

Apparently this is something all scientists must face. A prehistoric shark and a giant octopus? I wish I'd been a scientist.
Mistakes come fast and thick in a film which was so low budget they couldn't even afford a continuity editor. Debbie Gibon's, sorry Gibson's, hand double wears nail varnish in a defiant act of asserting her individuality, while Gibsons hands (seemingly unable to do close up acting) remain bare.
The director seems very fond of some black and white filter which he used frequently to express a range of story elements, including lightening, seagulls, cut scenes and science. Yes, there was a filter to show science happening. Science also seems to consist of mixing coloured liquids in various glass decanters and making sad or happy faces depending on the colours.
The characters are so stereotypical that once the 'strong' female lead has been established you can spend the next few minutes trying to figure out who the love interest will be. Don't worry, you'll know straight away from the painfully prolonged eye contact and clumsy flirting.
And on to the monsters. The octopus is suitably wibbly around the tentacle area and seems to hate the Japanese. I guess they eat a lot of octopus there so it makes sense. Why a giant Octopus? Well, giant Squid are real so there's always the possiblity they'll sue for defamation of character. Okay, there is such a thing as a giant octopus, but it's much smaller than the thing in the movie and I don't think there were any around in the Miocene period to have had some kind of ongoing gang fued with the Megalodons.
The shark looks okay when he's launching himself out of the water, but seems to have some kind of skin disease and movement issue when submerged. Despite his enormous size he leaves no wake when near the surface, and generally breaks the laws of physics. But he takes a plane out of the sky and it's cool.
The main characters are as follows:
The feisty female lead who thinks she's a mermaid. Mermaids don't use subs, dumbass.
Her overly Irish Professor, who crashed a sub to avoid a pod of dolphins.
An overly Japanese scientist who talks nonsense and cried when he saw a dolphin caught in a net. Why are they all gay for dolphins? They deserve to get eaten by a shark or an octopus. But they don't.
The three scientist stereotypes have to work with 'the feds' at a place we are repeatedly told is called 'Treasure island'. The feds are concerned because it turns out that the monsters are actually very astute business creatures who have taken over the seas to control the movement of oil. A reference to Guantanamo bay and an Obama bumper sticker keep this movie refreshingly modern for fifteen minutes or so.
Thanks to some kind of half hearted ethical / environmental message they decide to let the creatures fight each other, because they are the last of their kind so people shouldn't kill them but it's okay if they kill each other. Their original plan is to trap them, without any thought of what they would then do with them. Obviously that was doomed to fail, but the fight plan works out okay (apart from some submarines full of people dying). So the oil is safe and Japanaese people can go back to eating sushi. hooray. However, they do cunningly set it up for sequels. I guess they're hoping to replicate the success of the Shark Attack series. Fools! It can't be done.
And the song at the end isn't even sung by Debbie Gibson. It's probably sung by her hand double.

To summarise: All the best bits are in the trailer.