The Art of Ivory Ghosts

June 21, 2019
For the last couple of years I've been working for Kymera Press as an Art Director on 'Pet Noir' and 'Ivory Ghosts'.
I've previously discussed my work on 'Pet Noir' with The MNT. 'Ivory Ghosts' is a really interesting comic book, both from a production point of view and in terms of the reader experience. So, I thought it would be a good idea to write a little bit about the art process on 'Ivory Ghosts' too. 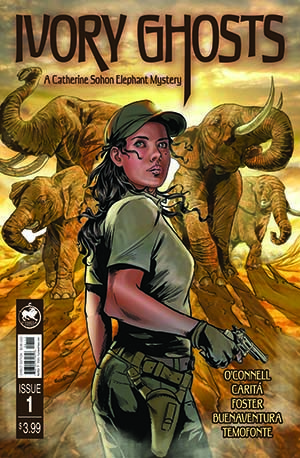 The comic is based on a novel by Caitlin O'Connell. It's a thriller set in Africa, following wildlife biologist Catherine Sohon as she investigates the illegal ivory poaching trade.

Caitlin has been adapting the story from the novel in to a comic series. Of course, there's quite a difference between prose and comic scripts, so converting a novel in to a comic takes some consideration. Writer and Kymera Press founder, D.Lynn Smith has experience adapting stories from one medium to another. She works with Caitlin on the scripts, editing and offering advice as needed.

Although it's fiction, it is set in the real world and, as a thriller, a lot of its impact relies on it being believable. Early on, it was clear that we needed an art style that would convey a certain amount of realism.
We had photo reference for the locations used in the book, as well as for set pieces etc. but we didn't want a comic that was completely photo realistic. One of the challenges was making sure that the art was accurate and stayed true to the reference while still retaining the charm of an illustration.

Before we started on the comic, we asked Débora to create some designs for the characters. This way we could make sure that we were all in agreement about how the characters would look. It also meant that we had handy reference sheets for later in production.
Catherine is the main character, so getting her appearance right was the first big step. She needed to be a realistic heroine, with practical clothing. She also needed to have a recognizable 'look' as a character. We went back and forth on a few different ideas, but all mainly within the same ballpark, so it was mostly a matter of refining it.

Once the main characters were in place we could move on to the story. The narrative art starts with the layouts. Layouts are sketches that show us the design of the page. This gives us an idea of the panel arrangement and the composition of elements within the panels.
Débora sends really nice layouts, they're always easy to follow and capture the essence of what she's going to do in the pencil stage.
In terms of composition we weren't looking for anything overly dynamic, it's not a superhero book, but it is still dramatic. As with most comics, the main goal is narrative clarity.
When I get sent layout pages I check them against the script, to make sure everything is there and that it flows nicely. I check that there's room for the dialogue, the action is clear, and that the composition works (e.g. there's no tangents or confusing line work). I look back at earlier issues or at the original designs to make sure the characters are on model and we know who everyone is. I also check it against the reference material to make sure it's along the right lines, although at this early stage we're just working with loose sketches. At this point, myself, Paul or Débora may suggest a different way to do something, which may deviate from the script (e.g. perhaps an extra panel is needed). This is the magic of a collaborative medium - sharing ideas and exploring creative solutions as a team.


There are a lot of conversation scenes in this story. This can be difficult in comics as it slows down the pacing and it can be a bit static.You want to avoid pages of talking heads. However, Débora's wonderful character acting and interesting compositions always keep it engaging.

Then come the pencils! Débora's work has the realism we were looking for, but she also retains a lovely, loose, gestural style which I think really makes it special. At this point I'm checking all the things I looked for at the layout stage again, and I also look at the shading and where the inks will go. Sometimes we bounce some stuff back to the writer, Caitlin, to verify.
Caitlin is an expert on elephants and has spent time working in Africa. So, we can tap her real world knowledge of the subject matter to ensure that we have an accurate portrayal of the environment.
A lot of care goes into this book. Paul,the Editor, and I like to ensure that everything fits with the script and the reference material. As a result, the pencil stage and approval on the pencils takes a bit longer than it might do on some other titles. The art team is very patient with our nit picking!

After the pencils come the inks. I also work with Laurie on 'Pet Noir'. The inks for 'Pet Noir' tend to be very tight and clean. We had to think a little differently on this book. Débora's pencils have a looser line quality that we wanted to retain as much as possible while also allowing for Laurie's crisp style of inks.
This book is darker in tone than 'Pet Noir', which appeals to a wide age range, so that is reflected in the art, which tends to have heavier shadows. It's also a lot more detailed so the inking takes a bit longer than on some of the other titles.
It can be easier to spot things once they've been inked, especially on the detailed pages, so sometimes there are alterations needed at this stage. If it's something big, we will ask Débora to correct it. If it's something minor, Laurie will handle it. At this point of the process we can also see what elements need more emphasis or less emphasis, if the lines and shadows are balanced etc.

Liezl is also the colorist on 'Pet Noir'. In terms of palette, 'Pet Noir' gives a nod to Noir and Sci-Fi aesthetics while still appealing to a young audience. For 'Ivory Ghosts' we wanted to make use of the beautiful colors of the setting without it being too bright, as that would not work for the tone of the story. The photo reference of the region was useful as a starting point. Liezl created a lovely, soft palette with a lot of depth and texture. She also incorporates the shading layer that you can see in Débora's pencil stage above.

Saida works across a lot of Kymera books. She also created the title logo for 'Ivory Ghosts'. For this book, we wanted something a little more demure than some other titles. We pulled back a bit on the sound effects, leaving in the animal noises for atmosphere and any noise essential to understanding what is happening in the story.

Elephants are an important element of the book. As I mentioned, we like to check in with Caitlin to make sure they look and act (and even sound) like elephants are supposed to. We also had to consider how to address the poaching aspect of the story. It is inescapably unpleasant, but integral to the story. We had to make sure that we were handling it in a sensitive way while still having an impact. We looked at reference photos so we knew what we needed to convey. Then we made sure that our depiction of slaughtered elephants was not gratuitous or too graphic. There's just enough to serve the story as needed, indicating horror without dwelling on it.

Débora delivers some sketches to us as a starting point and we work from there. We like to have our two main cover elements, Catherine (the main character) and Elephants (of course!), as the focus. The composition needs to allow for the title and credits. Débora completes the art for the covers by herself, handling the pencils, inks and colors. I check in on the pencil and color stages and give any further notes if needed.

Once we have all the completed files, Paul collates it all and preps it for print. At this point, the whole team looks through the finished issue to make sure that we haven't missed anything. It's amazing that no matter how much time and energy you pour into a project, little things can still sneak past, so it's good to have plenty of eyes checking it!
Of course, at some point you have to release the comic book in to the wild. We've been very lucky to work on a book that can have so much care and consideration put in to it, but we still have deadlines and eventually you hit a point where it needs to be printed. The important thing is knowing where you can make sacrifices, what things you can compromise on and what things you can't. It all comes down to the story you want to tell and how you want to tell it. Luckily, we have a great team who are able to handle the challenges of this unique comic. 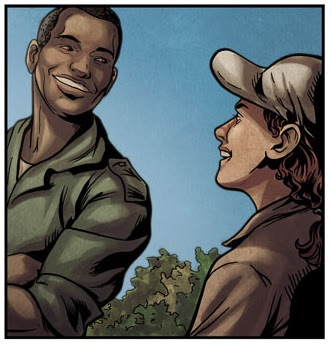 If you'd like to check out the book for yourself, Issue 1 is available now.
Issue 2 will be released at SDCC in July.
Issue 3 is currently in production.